This one can be done only on “Lung Hai Temple” Arena and is possible with almost all characters. Before you win the game make sure that you and your opponent are on the far side of the arena. Now one of the corners must be must be between you. Do a fatality and see what happens.

For this glitch you have to be a fighter who has the impale move with their weapon (except Kitana). Your enemy must be Bo Rai Cho. Do a puke puddle and step on it. Then try to impale Bo'Rai Cho. You will do the move, but the weapon will still be in your hands. However Bo Rai Cho’s blood will start draining. You can repeat this again if you want.

Out Of The Arena 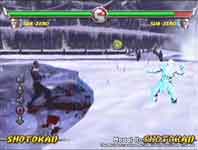 Win the first round and pause the game. Then unplug your controller and plug it back in and continue the game. Now you will be able to move around and even hit your opponent before the next round starts.

Play with Cyrax against Raiden. Finish Raiden with Cyrax's fatality (F,F,U,2). As Cyrax finishes his fatality you will be able to see Raiden's thunders around Cyrax's stomach.

Move to any corner on any arena with your opponent. In this stance do a projectile, sometimes it will miss its target. This can be done easily with Johnny Cage’s Forceball and Raiden’s Lightning Bolt.

Reset your Konquest mode, make it past the 8-th mission, then select Drahmin and go to mission 9 and save. Press START and EXIT TO MAIN MENU. Now go to VS mode and select any character. Now game will keep coming up with Test your might over and over again. Now you can get a lot of onyx/platinum koins. To fix this glitch, go back to Konquest mode and beat that mission with Drahmin.

Fatality Is My Style

Play with any character who has a style branch combo that changes their fighting style. Get your opponent's energy down so that he or she can only take one more hit. That last hit should be the style branch combo. If you do it correctly you will see that your fighter's fighting style has switched to Fatality but you can still move. But if you switch to another style, you will see its name displayed but you won't be able to move. This glitch can also be seen when your last hit is an impale move and the result is the same.

End the round with a hit which will land your enemy in a sitting position. Your opponent will be sitting on the ground until the next round starts. This is easily done with Sonya’s or Mokap’s “Downward Axe Kick” attack.

You Can Destroy My Physical Form But My Soul Is Eternal

Play with Kitana at the Lung Hai Temple or the Nethership when it is raining. When the game says "Finish Him/Her" perform her fatality (D,U,F,F,2). After the body explodes and the body parts are scattered all over the ground you can see that the rain is still dropping on the body witch is no longer there.

Play with Kitana against Raiden. Finish Raiden with Kitana's fatality (D,U,F,F,2). As Raiden explodes and the camera looks at Kitana you can still hear Raiden's thunders.

Play Versus, select Quan Chi and Scorpion in his alternate costume. Finish Scorpion with Quan Chi's fatality (B,B,F,B,3).When Quan Chi lifts up Scorpions head, it will just be floating in midair and his neck all be missing.

1. Choose Shang Tsung and do three Strong Knee attacks in a row. After the third hit your opponent will either float, be stuck in the ground or simply disappear.

2. Do Shang Tsung’s throw near a corner on any arena and your enemy will spin few times before get hit.

3. This can be done in Versus mode. One player must be a character with impale move (except Kitana), the other should be Shang Tsung. Impale Shang and right before he dies do the Soul Steal. He will loose the round, despite his blood is not completely drained and he will continue to fall on the ground until the next round begins.

1. After doing a simple pop up, do Scorpion’s spear. Sometimes it will be stuck in your opponent’s back.

2. Get in the “Corner Fatality Glicth” position and throw a spear. The spear will continue to be stickied in your enemy for few seconds.

1. Do a pop up followed by his “Dual Hooks Strike” move. Your opponent will float in the air for few moments.

2. Do Mavado’s Fatality on Reptile. Reptile’s tail will come up and be that way until the end of the Fatality.

1. When fighting with Reptile switch to his weapon stance and hold block. If you are lucky you will make his tongue stuck until you release the block button.

1. Do a close bomb and before it explodes do a throw. After your enemy stands up the character’s model will stand still as long as they don’t move.
2. Before winning the round do a far bomb and after it explodes get your enemy in your “Slice And Dice” special move while their in the air. You will play with your blade fan out until you repeat the special move.

3. Win the game with your blade fan out. Do a close bomb and immediately do Cyrax’s Fatality. The bomb will explode and your enemy will fly over you, but in the next moment you will grab him/her with your Grinder.

4. This glitch can only be done on “Lin Kuei Temple”, “Lost Tomb” or “Moloch’s Lair”. Move your opponent towards a pillar, statue or column. Do a close bomb and right after it explodes do Cyrax’s Roundhouse. If done correctly there won’t be an obstacle to see, but its “structure” will still be there. Now move so, that the imaginary obstacle is between you and your enemy. You are now able to hit him/her from distance. 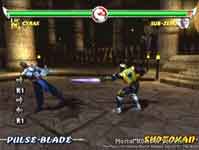 1. Do Sub Zero’s Fatality on Blaze. Blaze’s skeleton will be orange.

1. Do her Fatality on Mokap. He will freeze when her beam reaches his head and still he will look different. When she kicks the ice cube Mokap’s legs will disappear.

1. When “Finish Him/Her” appears on the screen jump and perform Lao’s Fatality in the air. When Kung Lao touches the ground he will begin to glide on the arena until he reaches the far end of it. 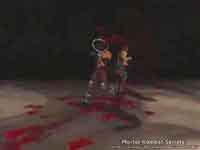 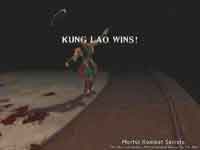