One of the first screenshots that was shown to the public was a picture of an early variant of the board game, that later received the name "Chess Kombat".

In this version you can see that the team has used some of the 3D models of Mortal Kombat: Deadly Alliance.

In one of the very early trailers a fight between Quan Chi and Scorpion in their MK: DA outfits has been shown.

The may (2004) issue of the German OPM magazine

In the May 2004 issue of the German PlayStation 2 magazine there was a preview of Mortal Kombat: Deception, that according to Midway was based on an old unofficial gameplay document. The document really was outdated but the game itself proves that the information in it is correct. All this makes that information perfect for this section. And here it is:

The Skab - Noob Saibot - Havik story began with this article. Below is the translation of the description of a character named Skab:

"Skab is the most disgusting fighters of all. If you take a closer look you will see parts from his rotting corpse and a skeleton."

There was even a render of that character in the magazine. Later in one of the game's trailers the same character appeared. The only change was that under the lifebar the name was Noob. 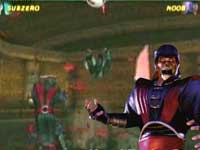 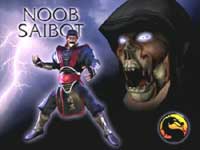 Finally the team decided that this model must not be an alternative outfit, but a character on its own just like it was in the beginning. So the character named Havik has been born.

The article in the magazine mentions that there were plans for Kabal and Sektor to be part of the game:

Kabal and Sektor will probably be also a part of the team, but there is а question-mark for the both of them.

Well, Kabal is in the game, but Sektor is not. Probably he was cut later.

Other interesting names from the article are Ken-Masters and 24:

There is no information about the others fighters, only their names: Dairou, Ken-Masters, a female version of Kano and a mystical character, known as 24. The last one is most probably the character you will create in the Konquest Mode...

Ken-Masters is the working title for Kobra, the female version of Kano is Kira and it is now clear that 24 is actually Shujinko. 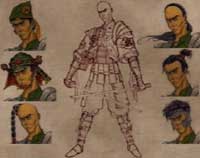 On E3 in may 2004, a little different version of the character selectscreen has been shown. There really is not a big difference. In this version playable are Hotaru, Sindel, Li Mei and Kenshi. In the final version you need to unlock them first, before you can play as them. A lot of the characters are on different places than on the final version of the selectscreen. 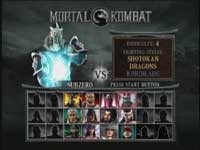