Ashrah Wont Stop
Play as Ashrah and wait until time runs out. Before that perform Spin Cycle. If you hold the spin button, Ashrah will not stop spinning even after the time runs out. 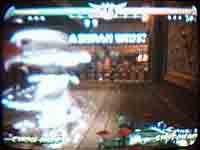 Version Number
Go to options then select any of the three options; gameplay sound or audio, and hold L1+square(ps2) or L1+X(xbox). These numbers appear at the bottom right. 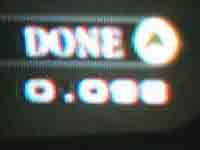 Village People Walk Trough Walls
Sometimes when it's time for a villager to go home they will walk through walls instead of going through the front door.

Off Distance Fatality
Do a fatality in any corner. 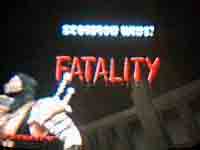 Background Words Change
Without a profile go to the Kontent menu and click on anything that require a profile. The background will change. 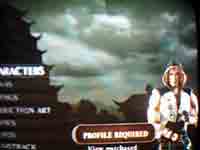 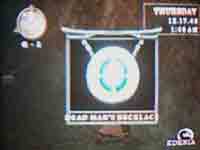 Walking on Air in Chaosrealm
Go to the outermost walkway in H-5, run towards H-6 against the invisible barrier opposite from the city you should end up walking off the path way on to the air. This takes you to a negative area. 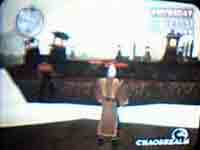 Stuck Spear
Choose Scorpion and select Beetle Lair stage. Stand toward your opponent with the stain glass between the two and use the spear with opponent blocking. He will be tethered to Scorpion until any damage is taken. 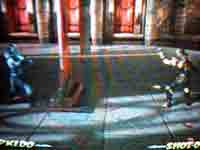 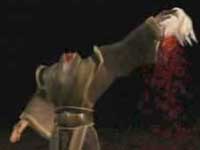 Extra Koins After Missions
This can only be done after you complete a mission, go back to the person to get your reward. If this person runs away, follow him or her. If the person doesn't run away this will not work. When the person stops he will start to throw his arm down to disappear. Right before the person does this run into him. He will stop and not disappear. Talk to him again and he will say the exact same thing as before. He will also give you the same number of koins.

Moving Kombatants in Netherealm
In the Netherealm (sector E2) you can watch 2 kombatants on a platform in the lava (from 7:00 to 10:00 pm). If you meditate each kombatant will slowly move forward. They will eventually be standing on the lava, but will still move forward. After a a couple of years of meditations, the character (Johnny Cage) that was originally on the left will have landed on ground You won't be able to talk to him, but you can kill him with some punches. 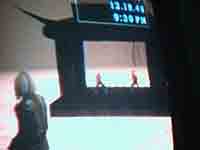 Floating Opponent
Play as Scorpion. When your opponent is in the air, hit him with your sword from below. So he will fly over you and will land on the air on your other side. This can also be done with Baraka. 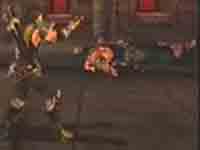 Glitchy Death Trap
When you are on "Dark Prison" arena push your opponent right into the deathtrap, but make sure that you are close to the trap too. So he will be killed and you will get stuck. 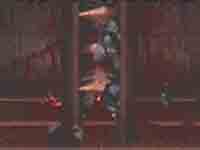 Floating Mileeena
Sometimes in a battle with Sub Zero, if Mileena loses she will float in the air. 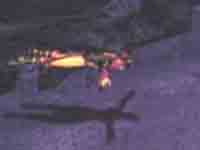 Noob-Smoke in a Prison Cell
Play as Noob-Smoke on "Dark Prison" arena. Push your opponent right into the hands of some of the prisoners. While they hold him, perform Smoke's Teleport Uppercut. Now you will be in the cell next to the prisoner. You can freely walk through the walls. 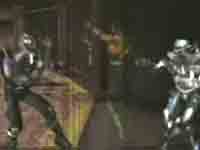 Man Walks Through a Barrier in Chaosrealm
In Chaosrealm in sector F2 around 7:40 PM you will see a man walking through the barrier. 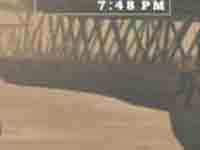 Note: All PlayStation 2 glitches work for XBox too.

Note: All PlayStation 2 glitches work for GameCube too.