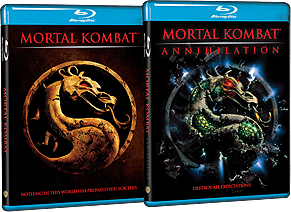 The two Mortal Kombat movies have made the transition to Blu Ray and will be released on April 19th, the same date the new Mortal Kombat game is released. We have the unique and exclusive possibility to review them before their official release. So, join us for the Mortak Kombat Movies On Blu Ray Review.

Lord Rayden (Christopher Lambert) has rescued them, but he cannot fight for them. They – a martial artist, an action film star, a soldier – are the chosen three. And while the world’s fate rests on their shoulders, the rest of us can enjoy the thrills as they compete to save us all in the body-slamming, mystical-tinged, full-tilt spectacle of creatures and conflict that is Mortal Kombat. Paul Anderson (Resident Evil: Afterlife) directs this astonishing and trend-setting experience that showed how to turn a smash-hit video game into a movie smash. Cheer these intrepid three Kombatants – they’re fighting for you!

The original Mortal Kombat movie has been released in theaters on July 13th, 1995 and was a box office hit starring Christopher Lambert as Lord Rayden, Robin Shou as Liu Kang, Cary-Hiroyuki Tagawa as Shang Tsung, Talisa Soto as Kitana and others. The movie has seen many home releases on VHS and DVD, but now it is coming on Blu Ray in the United States. And this release has a lot to offer.

The increased definition will definitely help you notice a lot more details from the movie. If you have seen the movie before, you will frequently jump off your chair with the phrase "That wasn't there before!" or "I haven't noticed that before!"

The list of Special Features isn't big but contains a definite surprise for every Mortal Kombat fan. There is the Theatrical Trailer and the Trailer for the new Mortal Kombat game. The most interesting of all, the inclusion of Mortal Kombat: The Journey Begins, an animated Adventure movie that tells the background story of several of the characters, including Sub-Zero, Scoripon, Shang Tsung, Kung Lao, Goro, and his brother Durak. This feature is unfortunately not in High Defition but the quality is once again the best we have seen so far. Missing from the Special Features list are all the character's biographies that were present in the original DVD release.

Now let's take a look at several clips from the Blu Ray release:

A new era…but for whom? The Mortal Kombat victory in the Outworld was supposed to give rise to a generation of peace on Earth. But never trust the word of the fiendish and the power mad. They’ve opened the portals linking their dimension to ours, and Earth will be overwhelmed – if a gutsy band of human heroes doesn’t acquire new kombat skills that will crush Outworld’s imaginative array of bad-ass warrior creatures. John R. Leonetti, cinematographer of Mortal Kombat and 2010’s Piranha, directs the fighting fury of Mortal Kombat Annihilation. Smash evil!

Mortal Kombat: Annihilation was released on November 21st, 1997 and unfortunately wasn't received as well as the original movie. Let's see what the Blu Ray release has to offer when compared to the original DVD release. The Blu Ray Version adds a lot more detail and quality to the picture as seen on the 4 images below. This will make watching this movie a lot more interesting and enjoyable. You will finally be able to notice Shao Kahn in the background when his minions are shown, or where exactly is Shinnok standing during the final battle. The Special effects also look better:

There is however one point, where this Blu Ray release leaves us wanting a lot more and that is the added amount of Special Features. There is the Theatrical Trailer and the Trailer for the new Mortal Kombat game and... that's it. The entire art gallery, biographies, 3D models, sketches, set designs, etc. from the original DVD release are missing and the long expected deleted scene with Quan Chi and Shinnok has not been added as well.

I am one of the people who believe that a picture is worth a thousands words or in this case a clip is worth a thousand pictures, so there they are, 6 clips from Mortal Kombat: Annihilation that will definitely convince you of the quality of the Blu Ray version of the movie: 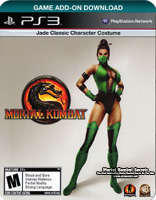 There are several other things that will surprise you if you decide to purchase one of these movies on Blu Ray. The first one is the Digital Copy. That's correct, the movies come with a code that will let you download a digital copy of the main feature to your computer or phone. There is support for ITunes and Windows Media. This offer expires on April 17th, 2012, so if you get the disks, don't forget to download your free digital copies as soon as possible. In addition, each of the two movies comes with a free code for unlocking Jade's Classic Character Costume for Mortal Kombat 9 on Play Station 3.

Despite the lack of Special Features in Mortal Kombat: Annihilation, the two movies have made the jump to High Definition and Blu Ray really nice and will be a great addition to the high definition action/phantasy collection of everyone. 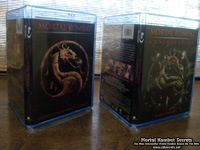 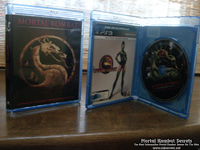