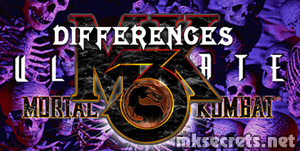 First, let us begin with the Mortal Kombat 3 VS. Ultimate Mortal Kombat 3 drama, and the basics. You will first notice that except the new logo and changed bios and endings (Ultimate Mortal Kombat 3 Arcade shows only the bios of the new characters and uses the VS images of the characters for both, the endings and the bios) Ultimate Mortal Kombat 3 has a few more characters: Jade, Mileena, Kitana, Reptile, Scorpion, Ermac and Classic Sub-Zero. By using a special kode you can play as Human Smoke too. Noob Saibot is now a male ninja, while in Mortal Kombat 3 he was a black palette-swapped Kano. There were a lot of rumors about Rain, but the truth is that he only appears in two scenes in the intro of the game, and was never a playable character in the arcade version of the game. Apparently, Noob Saibot was planned to be playable, because you can access him with a cheat and the game will not crash. However the team seems to not have added any button combination or a secret code to allow you to play as him. Ultimate Mortal Kombat 3 has also a few new arenas: Scorpion's Lair (which also has a Stage Fatality with extras), Jade's Desert, The Cavern, The Waterfront and The Lost. For some reason The Bank stage from Mortal Kombat 3 was removed. Another mystery for me was that they changed Sonya's Friendship, both are dumb, so I have no idea why they decided to change it.

Ultimate Mortal Kombat 3 introduces two new Game Modes: 2on2 Kombat and 8 Player Tournament. 2 on 2 allows you and your opponent to pick 2 characters and fight. The 8 Player Tournament allows each player to pick 4 characters and play through a 1 round battles tournament. The champion wins the prize which is one of Shao Kahn's Lost Treasures - another new feature for Ultimate Mortal Kombat 3. Shao Kahn's Lost Treasures contain 12 boxes. The first one is the ending of the specific character, others contain battles against Noob Saibot or Endurances, Finishers demonstration, Galaga. etc... On the Choose Your Destiny Screen there are 4 towers, while in Mortal Kombat 3 they were 3. Endurance matches were also added at the towers, and there are also Endurance matches with 3 opponents on the Champion tower. Shao Kahn's exploding animation has been changed. It just shows him explode and then it transports you to the Scorpion's Lair background where it says that you have beaten the game. In Mortal Kombat 3 it shows Shao Kahn's Tower disappearing. Anyway, these are probably most of the things you will notice when you watch the game and compare it with Mortal Kombat 3. Now, lets start with the changes in the gameplay.

Shang Tsung can no longer perform infinite combos in corner, using Single and Double Fireballs. A time limit was put in Ultimate Mortal Kombat 3 to prevent this. He also morphs back after he wins a round while he stayed in the character he was morphed in Mortal Kombat 3. Sindel's Scream will not "shake" the opponent if blocked like it was in Mortal Kombat 3. Jax's Dash Punch has longer recovery time and the ridiculous Missile spam was fixed. He was Top 3 in Mortal Kombat 3 because of that. Kano was upgraded with Vertical Roll, a cool special move which helps him a lot for punishers, run jab pressure and blocked hits. Liu Kang's Bicycle Kick decreases the run meter now and he cant run free after it. They also gave him an absolutely useless popup combo in Ultimate Mortal Kombat 3, because it activates double damage protection and you will have really big troubles getting a decent damage using it. Sonya was given a popup combo - 3 actually. Cool! But what they did with the Leg Grab? If you combo more than 2 juggled hits before it, it does 5%. If you combo it in an auto combo with more than 2 connect hits before it, like HP, HP, U+LP, it does 3% damage, acknowledging the fact that any juggle hits after an auto combo are DPed and it has it's own special DP as well. Stryker is another character that got huge upgrade in Ultimate Mortal Kombat 3. His Baton Dash throw move has now bigger damage protection if used after a DP move (it delivers the full damage in Mortal Kombat 3 no matter if its DP or not) and they armed him with the Gun move, which is the key to his infinites. Robot Smoke had no hit limit in Mortal Kombat 3 for his Harpoon move but it was slower, you get faster Harpoon that is disabled after 4 hits in Ultimate Mortal Kombat 3.

Jade, Kitana and Mileena are the three female ninjas that were added. All of them are fun to use but neither could be consider as broken or unbalanced character, they are mid-tiers not high. Despite limited juggle possibilities Jade could be a great zoner and wakeup spammer. It is a real crime what they did with Kitana and Mileena though, because of the damage protection which activates after Kitana's Fan Lift and Mileena's Roll. The male ninjas are back too: Scorpion, Reptile, Classic Sub-Zero, Ermac and Human Smoke (and Noob Saibot via cheat). Scorpion and Classic Sub-Zero being the weakest of them all are still fun to play. However there are few things that should be mentioned. Classic Sub-Zero's ground ice disappears much faster when it is used against cpu. Ermac and Human Smoke have a lot of missing finishers. Noob Saibot from other hand does not have any, and you cant perform finishing moves on him. Anyway, to skip the long and for some, probably boring explanation about the new characters and if you want to learn more about them and the gameplay in deep, definitely read our Ultimate Mortal Kombat 3 Strategy Guide, where you can read a lot more detailed information about all characters and how to play with them.