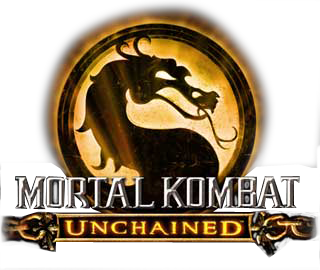 Now, what is new here? First, I want to say that it's great that Midway finally got rid of "the hidden characters" and you have all 30 characters at the select screen right from the beginning. Yeah, 30! Goro and Shao Kahn from the Nintendo Game Cube version of Mortal Kombat: Deception are present AND so are Frost, Jax, Blaze and Kitana from Mortal Kombat: Deadly Alliance. Everyone has 2 Fatalities and 1 Hara-Kiri, except of course the Deadly Alliance characters. All Mortal Kombat: Deception arenas are here too. Even the mini-games - Puzzle Kombat and Chess Kombat are present, plus of course the role-playing game Konquest. I honestly have no idea how they fit everything in. A new feature, exclusive for this port is the Endurance Mode, which was also in the home ports of Mortal Kombat 4. Basically, you will have to beat n opponents using only 1 character and 1 life bar. It's a cool challenge, but often the game is slowed down when the new opponent jumps in and the first few seconds after that. It is not a big deal actually, but still noticeable.

The graphics are good, but not that good as the 128bit consoles, and it is so obvious, that I am still surprised when I see reviews about this game where it says the graphics are equal to the PlayStation 2 ones. The game runs at 480x272 resolution, while the PlayStation 2 version of Mortal Kombat: Deception runs at 640x480. There are of course other technical issues that don't allows this portable system to beat the 128 bit consoles, but I will not get deep into that. Still, with the PSP producing graphics at a much lower resolution, it is very appropriate. The sound is good! There may be some missing sounds but I actually haven't noticed any. The wireless connection works good if both players are close to each other. I haven't played this game online that much, but it is acceptable from what I have tested.

The gameplay is build on the Game Cube version. Canceling tombstone drops by either backdashing or sidestepping after them (Bo Rai Cho: puke ss puke ss puke, etc... which is an infinite and double Spear glitch with Scorpion) was fixed and Dairou's ts drop was toned down. Jutsu still exists here, if you are not familiar what it is, read our Mortal Kombat: Deception review. Other thing to mention is the delay and the loading! When changing fighting styles, there is a half second delay. It's not that bad in single player, because it only happens when the player changes styles, and not the computer, but in multi-player, it gets really annoying when the game is halting every few moments while you or your opponent changes the fighting style. There are no loading times when changing styles if the game is played from the UMCD. But if the game is played from memory stick it will make it WAY slower than normal. All juggles have been toned down, so you cannot do long combos like on the big consoles and the gravity has been drastically changed. For example after a grounded TKS with Ermac you almost cannot juggle. The loading times could be annoying too. The Puzzle Kombat is not affected much by it, but it almost kills the classic and chess modes. A load time of ten seconds before every battle in chess mode really kills the fun, due to the high number of battles, and classic mode is always brought down by all of the loads before and after fights. Even Konquest mode is affected, and it is annoying to wait after you leave an area. One thing the game does better than Deception is The Krypt. Thankfully, all of the characters are unlocked from the start as we already said, and The Krypt unlocks other things, like alternate outfits. I want to mention here that if your PSP is flashed you could play the game from the memory stick. In this case the loadings will be much shorter.

I know the game received many negative reactions, and I personally don't like the new Mortal Kombat titles much, but this game could be definitely great fun for the fans and the Sony PSP owners. It is not made for competitive scene, neither for competing with the official Mortal Kombat games. It was just a quick project, made to satisfy the Mortal Kombat portable fans and to fill the waiting for Mortal Kombat Armageddon. The fact, that there are still a lot of people playing it, talks for itself.