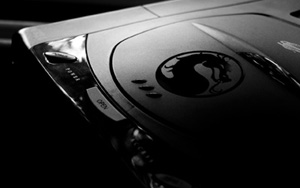 Sega Saturn was the most underrated console from the 90s (maybe after DreamCast). Game fans were first excited about it, then berried it and its game database once PlayStation got out. But what is interesting is that a few years later, Sega Saturn became more attractive than it was at first. Sadly, this was after the 128bit console era had begun. There are 3 Mortal Kombat (Mortal Kombat II, Ultimate Mortal Kombat 3 and Mortal Kombat Trilogy) games that have been released for the system. Let's see how those turned out.

Mortal Kombat II for Sega Saturn was one big fiasco. The advertising campagne for it was so huge, that the fans couldn't wait for its release. Everywhere it was said that it's a lot better than the PlayStation port, and that it's completely arcade perfect. Unfortunately this was so, so wrong. OK, the loading times were in fact shorter, but there are so many wrong things in this game. Of course Shang Tsung morphs were glitchy again, because of the loading times making it impossible to access the required data in time. Other things that were overlooked are: no music during the endings, missing sounds and frames, and a horrible gameplay. The gameplay is very slow. It is so broken that it changes the tier list completely. You can mid-screen infinite with Scorpion (RH, Teleport Punch, Spear), corner infinite with Johnny Cage (aaLP, Shadow Uppercut), easy 100% with Kitana and Kung Lao etc. The gameplay is like the arcade revision 2.1. Note that the European version is even slower than the USA/Japan but still everything broken for this version works in all 3.

Also, often the game slows down?! Every time a new move comes into play, the screen action stops for a couple of seconds to LOAD the move. This happens constantly during the entire match. There are few other things that should also be mentioned, Jade is white (?!?!?!), the sounds look like they are copied from the PlayStation version, the Pit II stage fatality is completely fucked up. There were also a lot muffled voice samples. For example, Shao Kahn's voice is so quite that sometimes you cannot even hear it. Shang Tsung has his "new" winning pose, where he laughs after winning a round or a match (it was in the PlayStation version as well, but with no sound). By the time this game came out, Mortal Kombat 3 was released on the arcades, and the home conversions were already on markdown shelves. I don't know if this was Acclaim's fault or Sega's but it was really weird strategy. As for Mortal Kombat II for Sega Saturn the only good thing about this version I could think of, is that the graphics look good by those days standards, but that's all.

The Sega Saturn version of Ultimate Mortal Kombat 3 uses some of the code and the resources created for the PC Win/PSX version of Mortal Kombat 3 (including Stryker's Friendship and cutted frames/animations). The game has the same graphics and menus. The main menu even uses the Mortal Kombat 3 Logo and not the Ultimate Mortal Kombat 3 one. Before I actually played this game, despite all the gameplay brokenness I was familiar with, I had a good opinion about it. But it turned out to be a wrong because the game is not that good. Something interesting about it, is that there was a BETA version released to public, but sadly I couldn't get my hands on it. It has way longer loadings and a lot of wrong sounds and sfx placed (sometimes even a weird graphic glitches). Male ninjas often do female grunts and female ninjas often male grunts lol. In the normal and final version the loading times were horrible again. There are loading times even during Finishing Moves. The graphics surprisingly were bad. Mortal Kombat II for the same system looked way better (and the same thing applies to Mortal Kombat Trilogy for Sega Saturn too). I also want to note that the European version of the game is slower than the NTSC versions. This game also has some "exclusive" features: the Bank stage is back, Shang Tsung can morph into Robot Smoke. 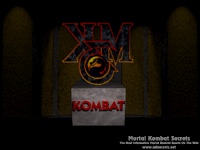 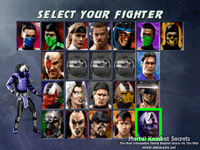 You can unlock Ermac, Classic Sub-Zero and Mileena via cheat menus although you still have the Ultimate Kombat Kodes (but with 6 digits instead 9 like it was in the arcade). Some weakness is that the hidden characters cannot be saved and after you reset the console you have to unlock them again. Noob Saibot uses Kano's images, just like in Mortal Kombat 3. The supreme demonstration can take up to 30 minutes to watch, because the console has to load each finishing move separately. As for the gameplay - it is bad. The whole gameplay slows down and speeds up rapidly. This allows so unbelievable juggles like adding 3 High Kicks in corner with Scorpion after his HP, HP, HK, B+HK combo, but in the same time after you anti air Spin someone with Kabal, you have to be as quick as possible, because the game speeds up during the Spin, and the opponent could fall on the ground really quick. Damage Protection after some hits is really messed up. In endurance matches the first opponent doesn't stay on the ground but slowly disappears (while in the 16 bit ports they explode), there are also loadings of course before the next character jumps in (the game shows "Prepare for next fighter" text during the loading). Some arenas have wrong background music (Waterfront uses Scorpion's Lair/Pit 3/Balcony, Scorpion's Lair uses the Bank music, etc...). The sfx sound sometimes too quiet. 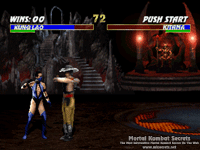 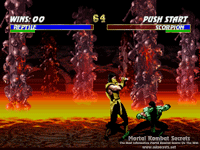 The Sega Saturn version of Mortal Kombat Trilogy seems to be exactly the same as the PlayStation one. And I mean the Greatest Hits not the Buggy version. You will notice that the loading times are longer. You have to wait 15 seconds before every match. Just wait until you get to Motaro and you lose. You'll have to wait abound 25 seconds in order to get past the continue screen, the Mortal Kombat Trilogy menu, to choose a character, and to finally have the match load. Rarely there are some slowdowns, especially when Bosses are fighting. When fighting in a single player game in the PlayStationversion before each fight there is a "Loading" text, which is sometimes missing in the Saturn version. Saturn's hardware wasn't capable of displaying transparencies. In Mortal Kombat Trilogy, as well as a number of other Saturn games, every sprite that's intended to be transparent is made up of spaced apart pixels to give the (incredibly cheap) illusion of transparency. So what that means is the Smoke's effect, Aggressor when activated and lifebars are pixelated and a lot of graphic glitches are possible. 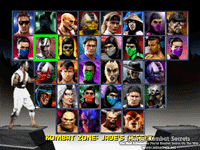 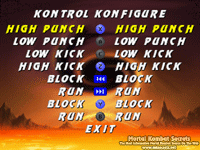 Sound effects are different, and lots of sounds are missing, like Shao Kahn's laughs (instead 3 you have just 2 that had different tremble), few robot sounds, etc... The arenas are the same as in the PC version (no animation in Wasteland, Armory and Dead Pool). Shang Tsung's Morph cancel infinite works here too. The characters are smaller. The black and white screen when you beat the game with the final hit is missing. There is also delay here. Kinda annoying for some juggles and I have no idea why it is there. Imagine you press a button for some combo or juggle and your character reacts like 1/4 second later....weird but it is there! I really haven't noticed anything else to be different. It was not a bad version overall, but the loading times, the bad sfx and the transparent issues make it way worse than the PlayStation and PC versions, but still I consider it to be better than the Nintendo64 one. 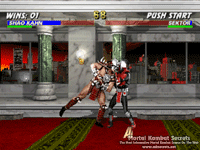 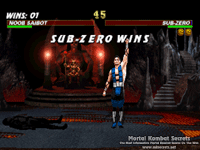