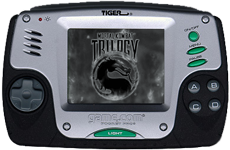 I am surprised how a company can have so many unsuccessful consoles. Everyone is learning from their mistakes, some harder than others, but eventually everyone takes a lesson. That apparently is not the case with Tiger Electronics. After their extremely expensive Handheld LCDs, Giga Fighters and R-Zone, they released the Game.Com, An innovative system with online capabilities (modem needed) and touch screen. Unfortunately the extremely low resolution the black and white image combined with the very short battery life, resulted in the a complete ignorance by the press and a very small fan base. Anyway, Mortal Kombat Trilogy was released for this system, so I decided to make one short review about it.

Mortal Kombat Trilogy officially was released for Game.com on January 1, 1998 - about two years after the other ports. It had a two player options (if you have compete.com cable) and ESRB rating (animated violence). What is interesting is that there were an early version of the game, which were never released to the public. Goro, Kintaro, Scorpion, Smoke, Human Smoke and Classic Sub-Zero were selectable characters. With the exception of a couple of screenshots and one trailer that are floating around the Internet, there is nothing else known about these versions.

The second version which was the official had 13 characters - Reptile, Mileena, Nightwolf, Kitana, Raiden, Jade, Ermac (hidden), Noob Saibot (hidden), Rain, Sektor, Shao Kahn, Motaro and Cyrax. Each character has 1 Fatality, Brutality, Friendship and Babality. All finishing moves have universal inputs that work with every character. Each character has 2 special moves, except Jade, Ermac and Noob Saibot who have 3. As I already said the Game.Com display was in black and white, just like the GameBoy one, and surprisingly the console was not that much more powerful than the Nintendo's handheld. The sound and sfx sounded a little better but still not even on the 16bits consoles level. Voices have pulled directly from the other versions of the game but sound muddled during gameplay. There's also no music during the gameplay, so you're left listening to the usual yells and grunts. 10 stages are availble - Dead Pool, The Street, Goro's Lair, Cyrax's Desert, Kombat Tomb, Altar, Cave of Souls, Portal, Palace (!), and The Belltower. 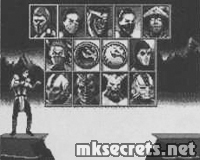 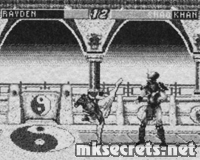 The gameplay was really choppy and glitchy. There is a delay/lag when you perform a fireball, and usually when two characters perform a fireball at the same time, you will often see that one of the two will not show up. Motaro can be hit by fireballs. Raiden's Fatality is missing the exploding body parts. Kidd Thunder also does not stay on screen. He fades as fast as he is created. Losing opponents do not always follow through on the "defeated" animation in the first round. Sometimes they do not even animate! Noob Saibot's Bowling Fatality will sometimes glitch depending on the opponent's location. As the ball hits the middle of the screen, the pins will leap to the same area, animate the strike, and then reappear in the original position upright. If you are playing against Rain, and he does his lightning, your projectile will sometimes be cut short in its path, even if the fireball is past the lightning's striking area. 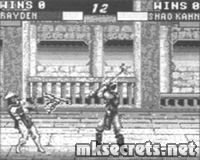 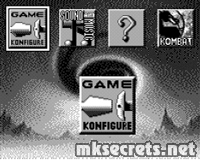 Some special moves do weird juggles (similar to Mortal Kombat Advance) and you can get funny looking combos like Fireball, JK, Uppercut, JK and etc. Aggressor mode was also included. When the meter is full and reads “AGGRESSOR,” you’ll be much stronger and will inflict heavier damage on your opponent. The game includes also a cheat menu which will allow you to enable one-button Fatalities, instant Aggressor, and Low Damage. Fatalities in this version can be performed anywhere on the screen. There are also rumors about secret codes to play as Scorpion. Highlight Rain and hold Up+Right+B+Left. Obviously this one is fake. 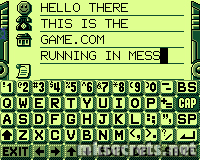 Sadly, the game still looks like an upgraded GameBoy port, and the year was 1998. Both the console and this port of Mortal Kombat Trilogy were quickly forgotten, and obviously there is a reason for that. In my opinion this port isn't worth your time, but if some of you still want to try it out, there is hope lol. Since Game.Com is completely rare nowadays and so are the games for it, you may look for emulation. MESS (http://www.mess.org) started the emulation of Game.Com about an year ago, but so far it emulates only the start-up logo and only one commercial game. MESS is a free emulator which emulates a large variety of different systems (including various Apple, Amiga and Atari models). The source code to MESS is freely available, so you can download it and make improvements. You are encouraged to send these back to the MESS team for inclusion in future versions of this program. As of version 0.136, MESS supports 439 unique systems with 1,161 total system variations and is growing all the time. However, not all of the systems in MESS are functional so check the specific driver pages (http://mess.redump.net/mess:drivers) to know the emulation status of your favorite machine in MESS. Who knows, in the near future the emulation may progress and start running more games, one of which may be Mortal Kombat Trilogy.

At the end I would like to say thanks to http://pmk.mortalkombatonline.com/" target="_blank">Portable MK for some info I have used from their site.