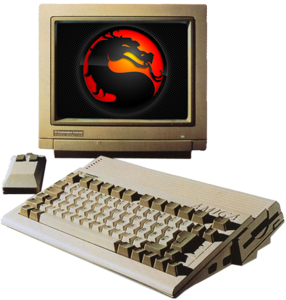 Amiga is one of the less known platforms of the past, at least among the new generation of gamers, but it sure left its mark on the history of the modern technologies. The first two Mortal Kombat games appeared on Amiga. In this article we will check what these two have to offer.

Mortal Kombat 1 for Amiga was hugely advertised in different Amiga magazines. But as history has thought us, good advertising campaign doesn't necessarily mean good product (another example would be Mortal Kombat 1 for Sega CD). The Amiga version looks weird. Lets talk about the sound first. It was good for its time. Kind of reminded me of the quality of the SoundBlaster16 for PC but it was actually better. Some tracks were different, but the main one sounded really nice. Of course tons of sound effects were not in the game (a lot of Sonya's screams are male), but you still got Flawless Victory, XXX Wins etc. 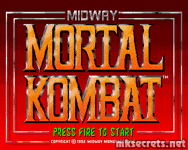 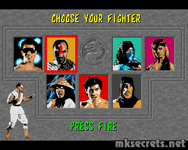 Sadly, the graphics were not that good if you compare them to the console ones. There are some graphic glitches that appear even in normal play. For example, if you play against Reptile or Sub-Zero and they freeze you, their hands and face will turn blue. Shadows are unfortunately missing too. The animations were very limited, there are a lot of missing parts from the backgrounds (some of the arenas just looks empty) and the gameplay is choppy. There is not even one animated arena. The characters at the select screen are not animated too. The gameplay is similar to Arcade Revision 3.0 and it looks overall more closer to the Genesis than to the PC DOS version (maybe because the backgrounds looked like they are ripped from this version). There are some difference still, like sometimes on Danger, you will be able to block a Jump Kick and another hit before you die, which is unthinkable in the Arcade version. 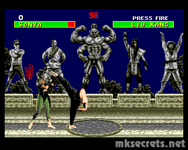 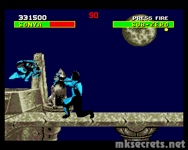 The broken throw stuff exists here too and obviously most if not all Revision 3.0 juggles. What makes this version more annoying are the loading times, especially in Endurance matches. A well known trick was that you have a short time to execute a special move after the second player jumps out, which was impossible in the Amiga version due to the loading times. When Goro falls after the 3rd Endurance match, you can do the first hit while he is roaring. It looks also that Goro has no damage protection and all hits produce the same amount of damage to him as they do to a normal character. Shang Tsung's morphs are a plus here. They are redone and Shang somehow explodes just before he morphs into someone which looks kind of cool. After you beat the game, the Shang Tsung's dieing animation is missing and he just explodes (using the same explosion animation that was used for his morphs). The game was bad in my opinion, don't know if Amiga could handle more. Personally, I don't like this port of Mortal Kombat 1.

The Amiga port of Mortal Kombat II was released at the end of 1994 and was advertised a lot. Critical reception was mostly favorable, ranging from CU Amiga Magazine's 95% Superstar award to Amiga Computing's 80% Gold Award. Amiga Power was particularly critical, awarding 63%. The game is definitely better than the Mortal Kombat 1 version, but not that good when compared to its console counterparts. It was a hybrid between the Genesis (no duck punch) and PC DOS (similar hot keys like P for pausing and Q while pausing for quit) versions. The music again was good but different, they have wrong music for some arenas (Dead Pool track on Kombat Tomb, Armory track on Wastelands, etc.). A lot of SFX were removed too. 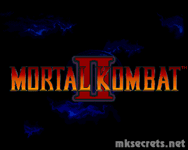 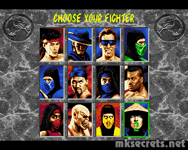 On the character select screen there is no preview for the currently marked character. The gameplay looks more like the one in the PC DOS version but way more basic and choppy. Again, the arenas are not animated at all which makes the game to look like the PC DOS version on Low Details. The graphics have improved since Mortal Kombat 1 but they still look uglier than most of the home ports. The characters have shadows now. Toasty Forden is Red (lol). The RH Infinite is not working, and some special moves and fireballs have faster recovery time. The loading times are shorter than they were in Mortal Kombat 1, although they are very annoying when performing a finishing move (especially PIT II which has really bad animation here). All the 3 hidden characters and Goro's Lair are present but Jade is white. The lying frames here are not predictable since the whole gameplay is choppy. 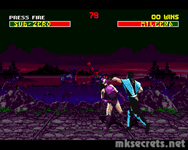 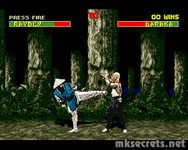 When you beat the game, the endings are like in the Genesis version, and the credits are shown on Goro's Lair. The 2 button Joystick option does not function on Amiga 1200, and the game could not be installed on hard drive (for Amiga Hard Disk owners). On original Amiga the game had difficult starting at first, and people had to turn off their computer and remove any extraneous external peripherals such as printers (leave the monitor connected) before repeating the loading procedure.