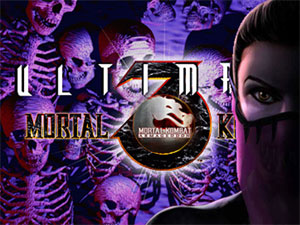 The Premium Edition of Mortal Kombat: Armageddon for PlayStation 2 featured an arcade emulated version of Ultimate Mortal Kombat 3 as bonus game. Was this worth the extra money, let's take a look together.

When you open the box of the Premium Edition of Mortal Kombat: Armageddon you will find out that except the bonus DVD you have Ultimate Mortal Kombat 3 as a bonus content on the game's DVD. How cool is that! And it's PlayStation 2 exclusive only. Sounds very neat, doesn't it? The game is an emulation of the arcade version, just like the version of Mortal Kombat 1 on the Mortal Kombat: Deception Bonus Disc and the Midway Arcade Treasures Compilations. But sadly, just like in all those, there are issues here too. The job they did with this port wasn't bad at all, but there are a few places that still need work. 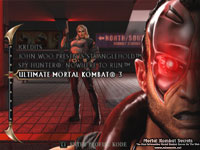 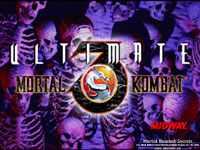 The game has minor loading times which I expected. This actually didn't bother me much. It takes about 3 seconds to load a match sometimes, but usually the wait is over a lot more quicker. There are music issues when you are transitioning between levels. The music hangs during the animation and goes into the next one, a bit odd and unlike the arcade which stops, the animation through the levels happens then the next one starts as they get up. After Finish Him is over, the music bleeds through again, and there is also some music bleeding between rounds. It is a little weird and I don't even know why it would happen. So it looks like Fatality crescendos sometimes are fucked up and it just starts to play the normal arena music. When you unlock all 3 characters, the colors of the select screen will go crazy. That's a well known glitch in MAME. Kind of makes you wonder why it happens here too LOL. It is really annoying that you have to unlock all three secret characters every time you want to use them. 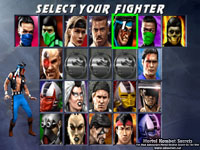 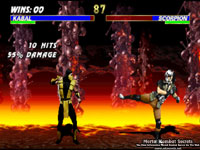 The most noticeable thing however, is that the game slows down at times, mostly in battles against bosses. When you destroy Shao Kahn or unlock secret character the screen changes really fast in the original Arcade version, there is a slow down on the PlayStation 2. There are slowdowns in Soul Chamber and The Temple arenas, sometimes also when you uppercut the opponent through arenas, and when you are using Smoke to fight Motaro. In fact Human Smoke's body sometimes disappear and then reappears. The problem resolves itself a few seconds after the first fight. It is a good thing that the "repeated arenas" glitch is fixed now. Forgot to mention, there is also an annoying slowdown for some specific combos, like Reptile's dash and run combo. There are also some missing frames here and there, not that they aren't there, they just don't appear. 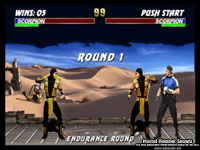 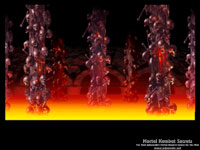 A little disappointing is that you can't configure your pad with different key settings, so you have to get used to the default controls. Everyone expected an online mode too, but there is none (probably because the Xbox360 version of the game was released shortly after this version). Despite all the flaws I pointed, the port is really not bad, and is very acceptable after all. I haven't noticed any delay/lag issues or other specific glitches for this platform and the sounds and graphics are just like they are in the Arcades. 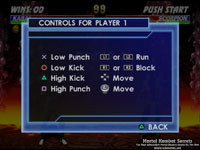 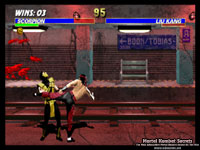 If you get a chance, give it a try. It is definitely a good port before the release of the XBox Live Arcade version of Ultimate Mortal Kombat 3, and a great add-on for the Premium Edition of Mortal Kombat: Armageddon.