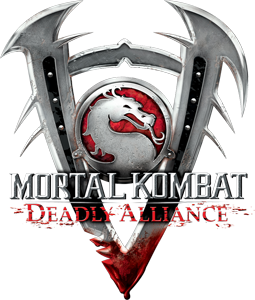 Mortal Kombat: Deadly Alliance was hugely advertised back in 2002. The Internet was literally flooded with trailers, teasers and images. Now before I begin, I want you to know that this game is not that good if you want a stable and good gameplay. You will not find such here. But overall, the graphics, the sound and entertainment factor reach pretty high levels.

One of the huge minuses when you start the game is that there are so many characters to unlock, some of which are even cooler than the default the game has given to you at the beginning. We all love secrets and codes and this is a Mortal Kombat game but hiding 11 characters out of 23 is kind of harsh. For some of you (including me) there is a pretty good chance the game might become boring before you manage to unlock every character. Anyway, each character has 3 fighting styles: 2 for hand to hand kombat and 1 weapon style. Exception here are Blaze and Mokap - these two have 3 hand to hand fighting styles. I have to admit that MOST of the moves look really realistic. If you pause the game you will see that there is a special moves/combos list for every character. There are really a lot of moves and combos (default) out there, but some of them are really useless and it will be pointless to use them in actual game. Konquest mode makes its debut in Mortal Kombat deadly Alliance. Here, you will use it as a training mode for each character (except for Blaze and Mokap). With them you can learn and practice all basic hits and combos in the game. This mode can help a lot of people to remember some of the useful moves and juggles. Fatalities are not included in the list, but with the power of internet it is really easy to find them. For example, you can visit Mortal Kombat Secrets where you will find them all. A good thing about Fatalities in this game is that you can perform them anywhere on the screen. 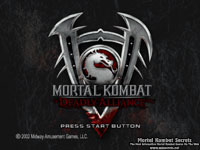 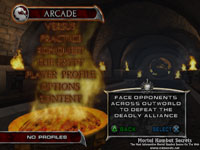 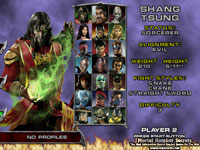 Some of the arenas are really awesome. House of Pekara is one of my favorite. It is unknown for me why there are no Stage Fatalities, the team could have added at least one since this is something like a trademark of the franchise ever since the original Mortal Kombat. Animalities, Friendships, Babalities and Brutalities are nowhere to be seen too. Let's get back to the arenas. You have to unlock most of them, but that's OK, because they are cool feature but not as important as the kombatants. You will need koins, a lot of them if you plan to get your hands on them. The koins here are something like a point system. There are 6 types of koins: Jade, Onyx, Gold, Ruby, Sapphire and Platinum. The main reason you collect them is to unlock stuff in The Krypt. And The Krypt is the place, where all the hidden stuff literally lays buried, including the secret characters. Here you can find characters, arenas, alternative costumes, production arts, flyers, sketches from this and older games and a lot more. It will take a really long time to unlock everything, since the game has no secret code that will give you koins (unless you use a third party device like action reply). There is a trick that requires 2 profiles and allows you to easily win koins if the second profile has at least 1000/2000 koins from each type. 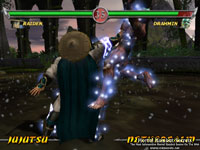 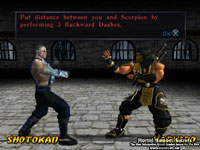 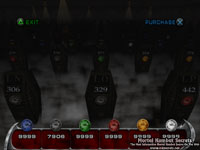 Test Your Might is back!!! Everyone should already be familiar with this mini-game because it is as old as Mortal Kombat itself is. The first version appeared back in 1992 with the release of the arcade version of the original Mortal Kombat. The concept of Test Your Might is pretty simple. By rapidly pressing a few buttons as fast as possible you are trying to collect enough strength to break an object. A success is rewarded with with platinum or onyx koins and a failure leads to humiliation by the crowd. The team has added a second mini-game, called Test Your Sight. Basically, you must follow the movement of 3 to 6 cups. Beneath each of them is an object and one of them hides the Mortal Kombat Dragon Logo. At the beginning you see where the logo is hidden. The reward are either Platinum or Onyx koins. 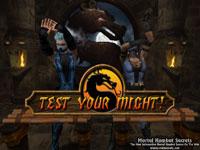 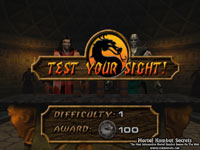 Now for my favorite part - THE GAMEPLAY. The game is a fully 3D fighting game (Mortal Kombat 4 uses 3D arenas and character models as well, but the actual gameplay was in 2D, except for the very limited side stepping). In Mortal Kombat: Deadly Alliance you can freely move in each direction. The Run-Button has been eliminated, a real crime for me, because it was the factor that turned Mortal Kombat from defensive into an offensive fighting game. What you have now is a backdash, which is one of the most broken things in the game. It's easy to turtle and can be used for countering either CPU (on hardest difficulty level) or a human opponent. If you have ever watched a high level gameplay of Mortal Kombat: Deadly Alliance it will be mainly turtling/positioning and then backdash cancels into counters. Another broken part is that 50% of the moves (and even some hits from combos) require low block pose, otherwise you will get hit, and low block pose doesn't block high hits. This is hard to get used to at first but later Check (one of the Mortal Kombat icons in the 3D Mortal Kombat games) discovered the duck cancel. Duck cancel is actually tapping Back/Forward and Down very fast, so instead of your fingers being centered higher on the controller, the game is basically being played in duck-block position and you can mix up your offense out of it. Useful about duck-blocking towards block animation is that it creates invisible frames from high to low, so as you are releasing down to press down again, the high to low block animation is completely safe. Mids will go through you, highs obviously will whiff and all you have to watch for are low attacks which you will block - kinda broken, isn't it? 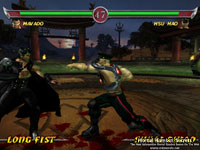 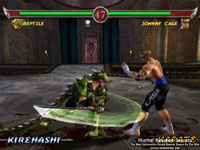 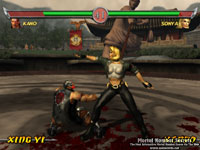 A lot of combos if blocked will whiff after few hits and you will be easily countered, so cheap damage is almost useless here, another thing that leads into turtling and countering. Side stepping is not always safe too, because there are hits that will hit you even if you are in side stepping animation. The jumps in Mortal Kombat: Deadly Alliance are really slow and easy counterable, but you can cancel the jump animation. Jump cancel is when you quickly jump with an attack and cancel it with another attack before the jumping attack actually comes out. The rolls are probably the most used when escaping after juggle or knock down hit (although there are pop-ups that will not allow you to roll). Some characters have a special move that, if done, will restore a little of their energy. If you are turtling as hell and backdashing like insane it will be easy against some characters to perform these moves. Next is Shove. Shove is a specific special move in some fighting styles that some characters have. It is one of the most BROKEN moves in the game. Once you get trapped into corner with a character who has a Shove move there is literally an endless number variations of traps that could be used against you. On Lung Hai Temple, the corners have a very little space, and getting trapped by a shove character there will be fatal. 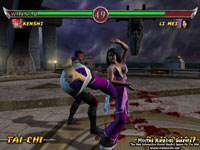 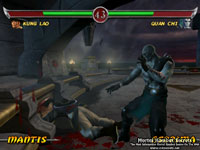 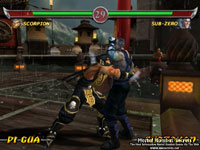 OK so, you got the idea about the gameplay and the game in general. Now, let's talk a little bit about the different versions. Mortal Kombat: Deadly Alliance was released for PlayStation 2, Nintendo GameCube and Xbox (GBA too, but this version is not part of this review). So, which one is the best? That's an easy one - the PlayStation 2, and here I will explain why. One of the major pluses that you will notice in the PlayStation 2 version, when comparing it to the GameCube version is the timing. There is a sort of a delay in the GameCube version, that involves the time between pressing the button and the execution of the action. This is very annoying for long combo chains. Of course that affects a lot of the actual gameplay as well, especially in vs mode, because you can easily miss while performing some of the huge juggles (this delay does not exist if you play on Nintendo Wii). Certain stages, in the GameCube version, slow down the game. Sometimes the things that cause the slowdown, such as the ice rain in the House of Pekara disappear, and so does the slowdown. The GameCube graphics also seem to not be that crisp and good as they are on XBox and PlayStation 2. 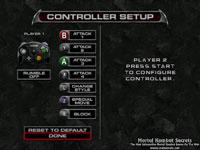 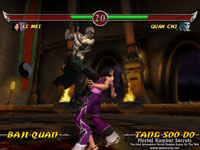 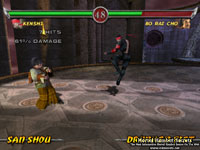 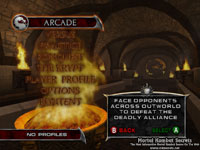 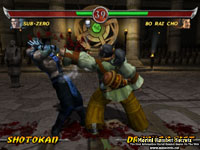 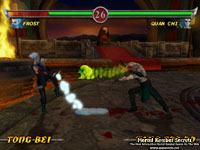 If you want to get the game then get the PlayStation 2 one, even the controller factor is not important here, because the game mechanics are completely different than those of the previous games in the franchise. I would say that the PlayStation 2 one looks most comfortable, although that doesn't mean you will not get used with the other two. As a conclusion I can say that Mortal Kombat: Deadly Alliance is definitely a great game for every Mortal Kombat fan. What this game really lacks is a good enough and stable gameplay, which almost every Ultimate Mortal Kombat 3/Mortal Kombat 4 high-level player expected from it.