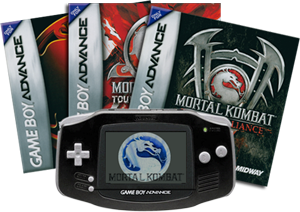 Mortal Kombat Advance is the first Mortal Kombat game that was released for GameBoy Advance. Its graphics represent those of the SNES port of Ultimate Mortal Kombat 3 really close. Sheeva is gone and characters like Motaro, Shao Kahn, Rain and Noob Saibot are made playable. You have all characters available except Motaro, Shao Kahn and Human Smoke right from the start. Unfortunately you can’t have all hidden characters unlocked at the same time, just one of them. Every time you try to unlock one of them, you will lose the previous one. The gameplay is awful!!! There are not recovery frames after some special moves, and for the ones that there are you can cancel them by executing another special move, even after executing a throw. Air kicks knock the opponent down to the ground immediately, aa punches or any sort of attack with some exceptions knock them down… however juggles are possible in the most unusual ways. A lot of Fatalities have been changed, some new ones have been “created” exclusively for this game. For example Masked Sub-Zero has a gelid breath using Reptile’s Acid Spit sprites, Rain and Ermac have new Friendships, Sindel's, Human Smoke's and Kitana's Fatalities have been slightly changed. Blood is virtually nonexistent except for a few spots that appear in the air and last for one or two frames only. There are several glitches in the game, totally crazy infinites and "original" new strategies such as backward run (by press F+RN and quickly holding B). Roundhouse is in this game an important element since it is one of the few moves that lift the opponent in the air and can be used for juggles. Characters like Stryker or Sonya suffer of slow, bad range and bad recovery roundhouses, therefore they are in serious disadvantage. There is no limit for any move, not even for running but you cannot take much advantage of an unlimited run due to the weird gameplay. Several move properties have been changed, Kano’s Grab, Liu’s Bycicle Kick and Sonya’s Leg Grab cause an immense deal of damage, while Sindel’s Scream doesn’t guarantee any hit on standing opponents. Sub-Zero can freeze the opponent in certain frame and hit them without unfreezing them, Noob’s Teleport Throw have the regular ninja throw at the end. The combo marker doesn’t really exist as it only appears in weird occasions. After uppercutting your opponent into a new stage it is possible to follow up with a juggle. Corners cause the opponent to fall down to the ground really fast. There are crazy new possibilities like with Kabal tossing a Plasma Blast while the opponent is spinning from a Dash to cause juggle and so on. In many occasions, during a Fatality or Friendship, sprites just disappear when the Word Fatality/Friendship gets draw on the screen. Motaro and Shao Kahn have different physic than the rest of characters. The endurance is still there as well as endings for each fighter. As a conclusion I have to agree with all the other critics and fans out there: This game will remain in the history as the worst Mortal Kombat game ever.

Mortal Kombat: Deadly Alliance is the second Mortal Kombat game that appeared on GameBoy Advance. It has 7 playable characters: Kenshi, Scorpion, Sonya, Jax, Frost, Li Mei and Kung Lao, 5 hidden, playable characters (Sub-Zero, Kitana, Kano, Quan Chi, Shang Tsung) and 13 stages (11 from the console version and 2 GBA exclusive - Spy Facility and The Swamp). This game was the first portable Mortal Kombat game to feature 3D style gameplay, although it uses 2D sprites. The game has a lot of the features of the original port such as Fight for money against a human opponent, Test Your Might, Test Your Sight, Profile creation, and even The Krypt with exclusive content. Each fighter has 2 fighting styles taken directly from the console version and some combos (up to 4 hits). It is also possible to link your own strings mixing different style attacks. The Weapon based Fighting Style returns as Weapon Special Moves which you can use at any time in any stance, much like the normal special moves. Fans should notice the return of Shang Tsung morphing abilities. Now he can morph even during throws, while in the air and during combos or special moves executions causing morph combo links of all sorts. Jump kick is more friendly and similar to the classic 2D jump kick which is good for juggles. Throws are now one overhead universal toss for every single character. Unfortunately some special moves from the original, console version of the game are missing, like Sonya’s Flying Kick, some work a little bit different like Kano’s Eyelaser or Sonya’s Poison Kiss which is really slow. Some new moves have been added, like Shang Tsung's Jumping Dive. Projectiles or attacks cannot be ducked and balance have not been taken proper care of. For instance Kung Lao and Kenshi are very rusty, and doesn’t respond well to the inputs, also their recovery time from most attacks is very slow. Switching between fighting styles is done by tapping a single button. There are no switch stance combos, but instead you can access all of the other stance moves and combos by tapping the initial arrow plus the change stance button and quickly the A or B button. Also new is the block cancel to recover faster: after several moves you can tap d/b+BL for an immediate recover, and easier juggles. The controls are in general not that good, sometimes the game doesn’t respond accurately, but everything works ok most of the time once you get used. This version also has the quick fall feature in which after certain number of hits the opponent will fall real quick to prevent infinites, but there are still various infinite combos and 100% damage juggles. Corner is more friendly in GBA than other ports. It has more in common with classic 2D games, just like the intro of the game, with a classic text screen. Some Fatalities have been changed like Quan Chi's. The game was ok for the GBA hardware but its not worth at all compared to the 128 bits versions.

Mortal Kombat: Tournament Edition is an exclusive GameBoy Advance Mortal Kombat game based on the previously released Mortal Kombat: Deadly Alliance engine (GBA version). The most notable correction in the engine are the fixed controls which are now way more responsive. The game has 10 playable characters (Shang Tsung, Bo Rai Cho, Quan Chi, Scorpion, Johnny Cage, Raiden, Sareena, Nitara, Mavado and Cyrax), 5 hidden, playable characters (Hsu Hao, Reptile, Drahmin, Sektor, Noob Saibot) and 15 backgrounds (The Armory being exclusive for this version). New modes have been included, and divided in Single Player Mode (Arcade, Survival, Tag Team, Practice) and Multiplayer Mode (Arcade, Tag Team, Tournament, Race to Raiden) There are two kind of Coins, Red and Gold. You can collect Gold koins in Multiplayer modes. The game is more balanced in comparison with Mortal Kombat: Deadly Alliance for GameBoy Advance, but it is not perfect: Hsu Hao’s throw doesn’t work, and in general the character is weak. Same happens with Reptile. Both have very slow recovery times from most of their attacks. Shang Tsung cannot morph into Reptile, but retained his ability to morph executing combos or changing his stance. Weapon Fatalities have been included, but they must be unlocked. The Krypt is back as well as the mini games Test Your Sight and Test Your Might. Profiles have now more detailed information. There are original endings for the new exclusive characters (Sektor, Noob Saibot and Sareena), more secrets, and the exact same playability as MK: DA for GBA. Despite some improvements, the game still has unbalanced characters, infinites and 100% kombos. Corners can be particularly deadly. Mortal Kombat: Tournament Edition was meant to complete the GameBoy Advance version of Mortal Kombat: Deadly Alliance, having most of the missing characters from the previous game and adding some story lines that where later used to further connect the fifth installment with Mortal Kombat: Deception. The only characters that are present in the console version of Mortal Kombat: Deadly Alliance and not in the two GBA games are Blaze, Mokap and Moloch. The game can be linked to MK: DA via cable to fight for Gold Coins (in this case only Scorpion, Quan Chi and Shang Tsung are playable, The Swamp and Acid Bath are the arenas that you can fight on and Weapon Fatalities are disabled). Mortal Kombat: Tournament Edition is by far the best Mortal Kombat game for GameBoy Advance.