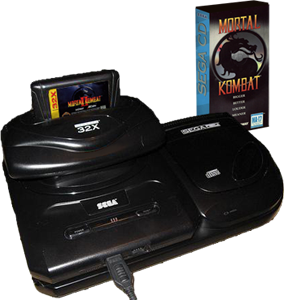 Despite the innovative idea behind Sega32X and Sega CD these two additions to the original Sega Genesis/Mega Drive turned out to be very unsuccessful. Both were very unpopular, due to several reasons: additional power supply, high prize, ... . All this did not stop Arena and Acclaim to release Mortal Kombat 1 for Sega CD and Mortal Kombat II for Sega 32X. Let's take a look at these two games.

The Sega CD version of Mortal Kombat 1 was advertised as "bigger, better, louder and meaner" than any of the other home versions available. What was finally heaped on the violence-starved customers was essentially the old Genesis version of the game with a CD-quality soundtrack. The Genesis and the Sega CD versions of Mortal Kombat 1 are almost identical with a few exceptions. What you have now is a very very low quality 3 minutes long introduction video, based on the most popular Mortal Kombat 1 commercial back then, more animation frames for the fighters and "CD-quality" songs. In the Courtyard, the pillar in left corner has a burning flame. The bottom of The Pit contains corpses of fallen victims and blood. Shang Tsung's head is animated and follows the action on the Throne Room arena. Goro's Lair has blood on the wall in both corners and also around the skeleton's hands (even the arcade version does not have blood there). The ground and the walls have traces of green grass and/or mold. Despite of all this some arenas still look surprisingly empty, like the Palace Gates. What is not done right is that the audio tracks are not played in the right order. When playing on the Courtyard stage, you will have to listen to the Pit's background music for example. This doesn't actually correct itself until The Pit, then each stage has the right music. When fighting against Shang Tsung the game plays a song that is not a CD Track but probably just a normal Genesis music, which is weird. Still, no matter how much it was done, you feel like you are playing just another Genesis version (Scorpion's speech is reduced to just one sentence). Sub-Zero's pose was fixed and because of the extra animations added it may be considered as a step in the right direction. What could kill you are the loading times. Sometimes they last even longer as they normally should. The game needs to load when you perform a Fatality, on Endurance matches when the next opponent jumps in and every time Shang Tsung morphs. The game may freeze or load much longer if you press Start during certain points of the intro video.

Mortal Kombat II for Sega 32X was more of an update of the original Genesis version, than a brand new game. Let's compare it to the Sega Genesis version: the game has a lot more colors (after all 32X is capable of displaying 32,768 colors, 256 on screen at the same time), there are more details added in some backgrounds such as the Dead Pool and Kombat Tomb, a few animations were also given to other background characters such as the flying shadow priests at the Tower and Portal stages, Hornbuckle and Blaze at the Pit II stage, the birds at Kombat Tomb and etc. Some characters received a few additional frames too, such as Shang Tsung's new laughing victory animation and Cage's win pose. Let's now compare this game to the Arcade version. The story intro was added and remained true to the original. The rest of the visuals are more closer to the Genesis version then to the Arcade. But they look a lot nicer. We are sure that the Sega 32X visuals would allow more. It is a known fact that 99% of the games for this platform do not use its full capabilities, due to short development cycle. The sound is good - although far behind the original arcade one. The Fergality-Finishing Move has been removed! Although a lot of new voices and grunts were added, there were no additions for Kintaro and Shao Kahn. The "Fatality" announcement has been included, but not unfortunately it is not the original from the arcade version. The 32X version of Mortal Kombat II still uses Genesis some music that's a let down for me.Bios screens were added too. Normal shadows have replaced the huge black circles from the Genesis version. Gameplaywise the game is identical to the Genesis port but you have crouch punch now! The Blue Portal stage has been replaced with Goro's Lair. Some special moves and fireballs look really weird. The lying frames exist here too but the gameplay is so choppy overall that you can't play this game in a serious versus match at all. I will just list the remaining minuses of this port: Ending pictures are missing, lots of missing sounds (like no crowd cheers at the Arena stage), Shao Kahn only has half of one insult and the body parts still disappear when they hit the ground. It was not bad port after all and it is far more superior then the Genesis and the SNES ones, but Sega 32X's hardware could handle so much more.