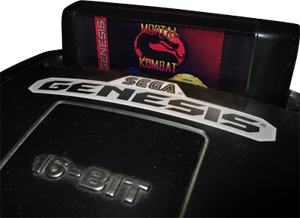 Sega Genesis or Sega Mega Drive as it was called in Europe was the 16bit console of Sega and without a doubt the most successful one. Despite all the processing power, the platforms' performance was far from those of the Arcade machines and the Mortal Kombat games released on this console suffer from it in almost every possible way. Add to this a few gameplay issues and you will get the picture, although good, these version are not perfect. Back in those days not so many people could notice the big difference, but with the progress of the technology the flaws of these ports became very visible. Lets now see what exactly these flaws are. 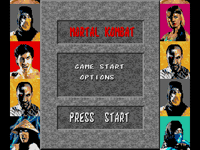 Mortal Kombat for Genesis had identical gameplay with Arcade Revision 3.0 with noticeable shorter recovery time for almost every single move. You can do such ridiculous stuff like Uppercut, RH (or aaLP/aaHP), Spear with Scorpion in the corner and etc and on the other hand some simple combos like aaHPx2, Teleport Punch with Scorpion will not work (because of the characters' size, they are smaller). Some sound tracks are changed - although there are quite a few sound really nice (like the background sound of The Pit). What is weird is that the throws are actually performed with HK button if you are using 6 button controller. There is no blood and Fatalities are censored but you can fix that easily with a Blood or DULLARD codes. The code notably spelled out "ABACABB" was a nod to an album by the band Genesis, obviously having the same name as the console. You can't knock out two heads with Cage and the broken throw stuff exists in this version too. Sub-Zero has the same stance as Scorpion. Although the game looks faster than the Arcade, it's actually slower (LOL). The animation is choppy and the controls are not that good either. Overall - its not a good choice for a serious gameplay. 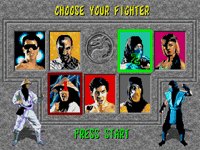 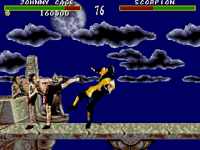 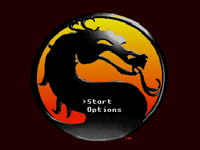 Mortal Kombat II was much better than Mortal Kombat 1. The music of the game has remained true to the original and sounds really cool. This version became famous with the whole Fergality thing. No one knew what it is. I remember people swearing they saw Jax taking out an RPG and shot his opponent!. By activating a cheat menu in the options screen, Dan Forden's "Toasty" image is replaced by a crudely drawn sprite inserted by one of Probe Entertainment's programmers. This image, apparently drawn by the programmer's son, was intended as a replacement of Dan Forden toasty image as a way to connect the game to Probe, rather than Midway. However, in the final version, this was just left as a secret in the game. The game is slower than the arcade version but with faster recovery time. You can do for example RH, aaLP, Double Fireball with Shang Tsung in corner (while in the arcade version you would be able only to add HK) or the Spear Infinite with Scorpion in the corner. The lying frames exists here too. What is a real crime here is that they removed the crouch punch (D+LP) for some reason. Goro's Lair is missing and replaced with a blue version of The Portal stage. The whole game is running at lower frame-rate than the arcade version. While the first MK had nice shadows for the characters here they all share just one black spot. A lot of sounds are missing and lots of animations are cut or swapped. The Shang Tsung's victory stance, where he is laughing is just a still image. The laughing animation can be seen in PSX and Sega Saturn versions and only during the credits of the Arcade and MAT ports. The animation exists in the Sega Saturn version too. Baraka's winning stance also ends with him bowing forward with his swords pointing down, instead of ending with him standing straight with his swords crossed over his chest and Cage's victory pose ends with his hands up. 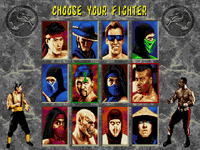 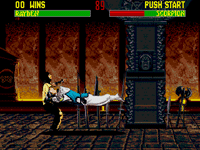 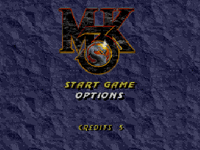 Mortal Kombat 3 was an incomplete game, but in my opinion, better than the SNES version. Well you got the duck punch now (down + lp) but it seems that the game was not tested enough and the pushback in corner was not activated after this hit. So, what that means is that everyone has an infinite in corner just using duck punches. The whole gameplay is choppy, some special moves and fireballs are harder to perform. The game is faster than the arcade. Almost everything that works in the original works here too, plus of course many broken things. The sound was not good. The poor quality of the sound and the graphics is really noticeable in the version. The Lost stage where you fight against Smoke and the Graveyard arenas are missing. Jax just disappears and then smashes you with his giant foot during his second Fatality, Stryker's Friendship uses dogs instead of characters, Liu Kang's arcade machine smash Fatality uses MK2 and not MK1 machine. Another difference in this home version is that some of the special moves actually have a second, alternative, key combination. Example here is Kabal's Blade Saw, instead B, B, B, RN you could execute the following: hold Back,Run, Run, Run. This technique works with all special moves which execution includes B,B or F,F. Special Moves that requires to hold a button could be performed by tapping twice Back or Forward and pressing a specific button (like Jax's Ground Pound F,F,F+LK). The final result of the execution of some moves is different too. Cyrax's throw for example will not change the on screen side of which the opponent is. On the good side, the developers did not forget to include some extras: you can play with the bosses. Unfortunately because of the crappy gameplay you can't enjoy them much. A lot of kodes and cheats were added too in order to make the fun last longer. 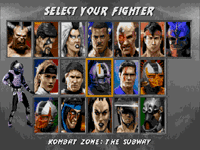 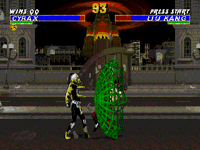 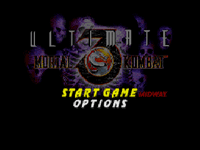 Ultimate Mortal Kombat 3 for Sega Genesis was a good and a bad game at the same time. In order to fit the big amount of additions the team had to remove other things. A lot of arenas are missing (although their background musics could be heard in the secrets menu). Sheeva was removed as a playable character and her place took Noob Saibot and Rain. Animalities and Mercies are also missing but hey, at least you get a brand new Brutalities, right? There are some special moves for the old characters that were added. Shang Tsung can morph into Robot Smoke, Rain and Noob Saibot. Nightwolf has the Red Shoulder Slam. The musics for some arenas are wrongly placed. For example the music from The Temple will be played on Scorpion's Lair. There is also that "Toasty" Brutality exclusive which I actually don't know how it works. This version also contains a rendition of Pong entitled MK4 which is the same as the one that appeared in the Genesis port of Mortal Kombat 3. Shao Kahn's treasures are only 10 instead of 12. Mileena, Ermac and Classic Sub-Zero are playable without any need of codes. The name of the characters are no longer announced which is really bad. Uppercutting in the Subway and Soul Chamber does not take the player to the level above. Scorpion's hellraiser Fatality is different. It just takes the opponent back to the hell stage where they simply catch on fire and explode. Sonya's friendship is her MK3 one not her Ultimate Mortal Kombat 3 one. Air juggle combos are easier to do than in the Genesis MK3 version. In fact they fixed a lot of stuff that was wrong in Mortal Kombat 3. Kitana's kiss of death only inflates heads. Few words about the gameplay. It' s ridiculous that the duck punch (down + LP) infinites are still in the game, the pushback is smaller. Noob Saibot is so fast and broken that he quickly became God Tier. Human Smoke is not fast like he was in the Arcade and has the same combos Scorpion has. Although it's a big improvement from Mortal Kombat 3, it's still not a good port for a serious play. 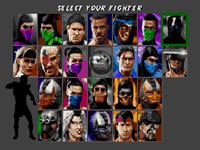 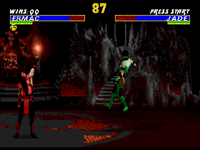