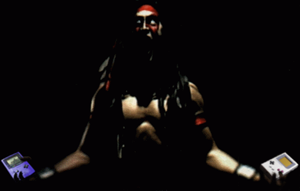 As one of the most successful handheld systems of all times, GameBoy (Color) received ports of four Mortal Kombat Games (MK1, MKII, MK3 and MK4). The difference between these versions and the original arcade ones is of course huge, mostly because of the limited hardware of the two systems. So we cannot talk about comparison of any type. Let's see what they have to offer.

I remember back in the days, that the GameBoy version of Mortal Kombat 1 was the source of so many rumors. The single fact that Goro was a hidden playable character in this version supported the dreams and the speculations of countless number of fans that he is unlockable on other platforms as well. Which is of course not the case. Anyway, for this handheld you have Kano, but guess what... no Cage?!?!?! Despite the fact that the cabinet design for the Arcade machine involved Cage I'm sure that no one will notice his absence from the GameBoy version! There is actually a way to play with Cage if you use a GameShark code (he looks like Sonya, but the lifebar says Cage). Why was he removed remains a mystery. As for the actual game, you have 3 arenas (the Pit, Courtyard and Goro's Lair), while the Game Gear and the Master System version had only 2. Some of the finishers were remade, probably because of the anti-violence policy Nintendo had during this time. Raiden turns into electricity that makes the opponent explode, Sub-Zero does some weird Low Punch that kills (?) the opponent and Kano does this sliding Roundhouse into opponent's face... which was really dumb. Using Gameshark codes you could play as Column, Mirror, Match and Kombat. The gameplay is awful. It is so slow, that you will need at least half an hour to beat the game (playing with Goro doesn't count). You have the "Flying RHs" which is something like a trademark of the GameBoy versions and most of the Fatalities button combinations are different. You will have to make a short pauses after each key when performing some special moves and Fatalities. Otherwise the game will just not recognize the input.

I played the GameBoy version of Mortal Kombat II a lot when I was a kid. The fun stuff was that I really enjoyed it. It is way faster than Mortal Kombat 1, the music and the graphics were better too. Cage, Baraka, Raiden and Kung Lao (Editor's note: Looks like someone in the development team hates Cage.) are missing, and from the bosses they have removed Kintaro. Just like the Game Gear/Master System versions you have 3 arenas - Kombat Tomb and Pit II, for the secret characters you fight on weird arena that looks like the one from the Game Gear/Master System one but you have bricks as a background instead of skulls. Oh yeah, no Noob Saibot too. Again, I can't say something very positive about the gameplay, but it's way more advanced that it was in Mortal Kombat 1. Air kicks send the opponent straight to the floor but you can do even some infinites (I still remember the Scorpion Air Throw mid-screen infinite lol). Every character has a stage and normal Fatality plus Babality. You can perform Fatalities anywhere on the screen, the character will just walk to the right position after you pressed the right combination. Some special moves and fireballs do juggles and that allows you to perform combos that would not be possible in the arcade version. You don't have any bios, ending screens and intros. I remember that there are a lot of glitches involving Fatalities (you can check them in MK2 Glitches section) and some special moves if performed against Shao Kahn. I still think that this version is fun, although I won't play it again any time soon.

The first two games have also been released as a compilation cartridge on GameBoy (and on PC) somewhere in December 1997. The versions are identical to the original ones. The 2-Player feature works with the regular Mortal Kombat 1 and Mortal Kombat III cartridges as well, however the GameShark codes do not.

Mortal Kombat 3! What a horrible port it was... It was almost identical with the port released on GameGear/Master System just with no colors and glitchier gameplay. It is a really fun fact that they released the game as "M-Rates". Ok, so you have Sindel, Sektor, Kabal, Sheeva, Sub-Zero, Kano, Sonya and Cyrax. You can play as Robot Smoke via kombat kode and with Shao Kahn via GameShark. The missing characters are Jax, Kung Lao, Liu Kang, Stryker, Nightwolf, Shang Tsung, Noob Saibot and Motaro. You have 5 arenas, the same that were in the Game Gear/Master System versions. Again, each character has 1 Fatality and Babality. While Mortal Kombat IIhad the original Fatalities, Mortal Kombat 3, just like Mortal Kombat 1, had changes in some of them: Sindel's and Sheeva's were remade just like the Game Gear/Master System versions, Cyrax has the Helicopter Slice Fatality (in Game Gear/Master System he had his Bomb Fatality), Smoke's Fatality was completely changed - he just shoots the Harpoon into the opponent and then the opponent dies (cool huh?) and Shao Kahn smacks the opponent with his Hammer (you will need GameShark for that). Shao Kahn also has Knee infinite and his Special Grab has a full screen range. As for the gameplay - you have the most broken Roundhouse an MK game has ever had. It juggles the opponent really high and you recover from it too fast, and that allows you to do such a ridiculous infinties. Here are a few examples: Sindel - RH, Scream; Sub-Zero RH - Freeze and etc. Oh yeah, there is no hit limit either. I never liked this port then and I don't like it now too.

Mortal Kombat 4 was the only MK game released for GameBoy Color, somewhere in October 1998. It had "Teen (13+)" rating and only 1 player option. You have 8 playable, 1 secret (Reptile) and 1 boss (Shinnok) characters. The missing ones are Jax, Jarek, Kai, Johnny Cage, Sonya, Goro, Noob Saibot, and Meat. Every character has only 1 Fatality. It's somehow weird, because after you do a Fatality, the screen switches into black and white and it shows you a short crappy movie of the Fatality you did. Then all the screen goes red and it says Fatality. You don't have bios in this version (but you do in the manual) but you got endings. Reiko's GBC ending became so popular because it said he was Shao Kahn, that the MK team was forced to officially announce that the game is not cannon in an old interview. Anyway, you have 5 stages (The Living Forest, Reptile's Lair, The Elder Gods, Ice Pit, and Shaolin Temple). Just like in Mortal Kombat 3, you could input a Kombat Kode before any match (it uses MK3 Kombat Kode icons). The gameplay was OK for a GameBoy, there were even some huge combos. Scorpion's Teleport Punch was glitchy and could take about 50% of your opponent's life if done right. It was build with the Mortal Kombat 3 engine. Using Gameshark codes you could get fireball sprites from Mortal Kombat 3 including Sektor's Missile, Kabal's Saw, Sindel's Air Beam, and some programming like Sektor's Teleport or Kano's Cannonball. Shinnok has special moves. Sub-Zero can still do Roundhouse - Freeze infinite from Mortal Kombat 3 for the same platform and Quan Chi has a Roundhouse - Slide infinite. The game anyway, looked ugly even for a handheld version, and it was not received well. Something interesting to finish this review is that at first the game had different characters, later removed, but for some reason the pictures remained on the back of the box.