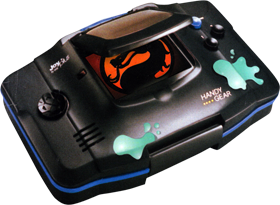 In this second Kombat Kolumn we will take a look at the Sega GameGear and Sega Master System versions of Mortal Kombat 1, II and 3. Long forgotten and probably never seen by the newest fans of the franchise, these games are part of the Mortal Kombat family and we don't intend to let them remain in the shadows.

Mortal Kombat 1 was released for both consoles on "Mortal Monday" - 13.09.1993 and it was a MA-13 rated game. The Game Gear was not that bad for a handheld version (remember it's 1993 we are talking about). Kano is missing (and Reptile) but you got both Goro and Shang Tsung. Two arenas are available - The Pit and Goro's Lair. The gameplay is really horrible to be counted as something. You can do crappy combos like Lightening - Torpedo with Rayden, Flying Kick - Sweep with Liu Kang and etc. Some of the special moves and Fatalities are with completely different button combinations (which is noticeable in GameBoy version too). You have to make a short pause when inputting a special move (that applies to Master System version too). Sweeps don't work against the bosses and if you try Cage's Nut Punch vs Shang Tsung the game will freeze.

The Sega Master System version is actually almost identical but the characters are smaller, there is bigger distance between the lifebars (actually the whole on-screen display is bigger) but yet somehow looks better. When this version was first released several codes circulated around magazines saying how to play as Goro and Shang Tsung. These were of course fake but that didn't stop the people from keep trying and trying.

Both versions have random opponents but the arenas always go in a specific, predefined order. I'm still not sure why Midway decided to release a 8 Bit version of the game. There was a lot of advertising in various magazines especially about the Game Gear version. One thing is for sure - it was no fun.

Mortal Kombat 2 didn't offer something huge too. It was released somewhere in Spring 1994. This time the game has MA-17 rating. The Game Gear and Master System versions are actually the same with the exception that the Master System has more distance between the lifebars and the time, smaller characters and larger screen. The only announcement that you have is "Fight!". Some moves do weird juggles like the ninja slides for example. Some special moves and fatalities again are performed with different key combinations (every single character has the same command input for the stage fatalities). Although the whole moves list was posted in various magazines, Shang Tsung and female ninjas are still with unknown combination for their stage Fatalities (the official combinations work only on the Master System version). But anyway, the missing characters are Kung Lao, Johnny Cage, Raiden and Baraka. Everyone has a stage and and normal Fatality. Some of these finisher actually started a lot of rumors back then (like Liu Kang's Red Dragon Fatality during which he burns the opponent). A few other finishers were also changed: Jax performs a multi-slam throw with the opponent eventually exploding, Kitana's Kiss of Death makes the opponent to explode too and Reptile eats the whole opponent (not just the head). You have 2 stages Kombat Tomb and Pit II. Vs secret characters (only Jade and Smoke, Noob Saibot is missing) you fight on a weird stage which looks like the Kombat Tombthat has a filled with skulls wall in the background. Another difference (that sometimes is really useful) is that the Master System had a Pause button while the Game Gear versions doesn't. Again just like Mortal Kombat 1 - your opponents will be random, but the stage appearance go in specific order.

Mortal Kombat 3 was the last Mortal Kombat game released on both consoles, somewhere in 1995. It was not enjoyable at all. The differences between both is again the screen size and the life bars, I also didn't heard any background music while fighting in the Game Gear version (but i got it in Master System). The arenas are bigger in Sega Master System and the lifebars are shorter. For some reason I like Game Gear's graphically better. Otherwise both versions have 11 characters (8 playable, 2 secret - Smoke and Noob Saibot and 1 boss - Shao Kahn), 5 arenas (Pit 3, Bridge, Subway, Temple, and Bell Tower) and each character has 1 Fatality and Babality. The missing characters are Jax, Kung Lao, Stryker, Liu Kang, Shang Tsung, Nightwolf and Motaro. You can input kombat kodes in a single player game before a match vs CPU. The gameplay is of course nothing serious - almost every single hits juggle and somehow delays before hit the opponent. This builds some funny infinites like RH, Freeze with Sub-Zero, RH - Scream with Sindel and etc. A lot of finishers were changed here too. Sindel screams and burns the opponent, Sektor shoots a missile that also burns the opponent, Sheeva teleport stomps the foe, in Kabal's disfigured face Fatality, the opponent just turns white and dies, Smoke's bombs cause just the opponent to explode and not the entire Earth, Sub-Zero freezes the opponent and then makes him explode, Cyrax's self destruct Fatality kills only the opponent, and Noob Saibot has the same Fatality as Kano's. Something interesting about the Game Gear version is that Motaro was listed in the Manual but was not in the actual game. The Sega Master System version was released only in Brazil for some reason. My personal opinion anyway, is that Mortal Kombat 3 for Game Gear and Master System is the worst Mortal Kombat game ever released for both consoles.

Back then, the Game Gear versions of the game would probably attach a little more fans then those on Master System. I mean, lets face it, it is a Hand Held system after all. By today's standards... these games would hit the bottom of my Christmas present wish list. So, if you still haven't played them and wonder if you should try them, just to see how they feel, my advice will be, just to watch videos around the net, instead of playing them.