Kombat Kolumns: Back To The Primitive HandHelds 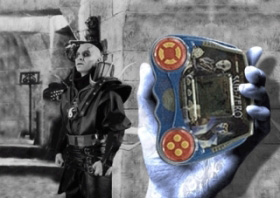 Do you remember the good old days when handheld games were so primitive. I played Street Fighter for HandHeld LCD few days ago. It was really horrible but yet somehow fun. Then I remembered all handheld versions of Mortal Kombat games released throughout years. There were HandHeld LCD, Barcodzz and even Giga Fighters ports. So anyway, they all look like crap now, but back in those days there was a big advertising about them and they were actually a big deal. So let us now take a look at all those versions of Mortal Kombat that remained lost in time.

Mortal Kombat 1 was released for Handheld LCD in 1993 and for Tiger Barcodzz in 1994. Um... OK. After all those are official versions. We can't really talk about the gameplay here or compare the graphics and the sounds with those of the arcade version, so this will just be a quick overview. First about the Handheld LCD version. All moves can only be performed when you are away from your opponent by pressing the LEFT key before doing a move. All moves take away about the same amount of damage and they all look exactly the same. In this version you get to Shang Tsung after defeating only 4 opponents (or rounds). All 7 characters from the original game are present but you only get one special move per character. Bosses are included, but unfortunately Reptile is nowhere to be seen. The game contains only one arena called Hall of Champions. The only way to finish off your opponent is by performing a fireball move you see the familiar "Finish Him/Her". If you pick a character on the Right side, then you'll fight Sub-Zero, Kano, Rayden, Scorpion, and Shang Tsung. If you pick a character on the Left side, then you'll fight Liu Kang, Sonya, Johnny Cage, Goro, and Shang Tsung. You have the HK, HP, LK and LK hits plus On/Start to turn on the game, start each round, and to start each bout, and option to turn off sound. What is interesting is that you have Jump HP or LP and Jump HK and LK, which was first introduced officially in Mortal Kombat 4. If you pick a character on the left, Shang Tsung can only morph into the characters you fought on the right. If you pick a character on the right, he will only be able to morph into the characters you fought on the left.

There is also a weird point system in the game: 10 points for a successful normal attack, 70 points for secret attack, 400 points by winning a bout and 600 points if you beat the game. The battle plan is not random, you will always fight vs the same opponents, it only matters if you pick a character from the the left or the right side. 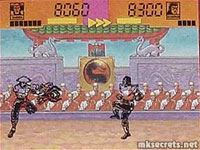 The Tiger Barcodzz version has 5 characters and only 1 boss, which is of course Goro, and not Shang Tsung which makes the game even more weird! Missing characters are Johnny Cage, Kano, Sonya, Reptile and Shang Tsung. There is again only one arena - Courtyard. The point system is different, now you have 40 points per normal attack, 200 for "POWER UP" special, 500 if you finish your opponent and 1000 if you beat the game. If you pick a character on the Right side, then you'll fight Rayden, Liu Kang, and Goro. If you pick a character on the Left side, then you'll fight Scorpion, Sub-Zero, and Goro. You will also need to use the Barcodzz cards for Mode 2 (1 player mode) and 3 (2 player mode) and use the SELECT button for it. The Barcodzz cards give you additional background on characters related to the game as well as provide you with secret techniques that can change the game every time you play. These secret techniques actually can intensify your strength and abilities. Some cards can strengthen of your opponents others can weaken them. There are also cards that can force an immediate outcome like an automatic win for each side. The On/Start button is to turn on unit, to start the game, to start each round and to skip barcode insertion. The blocking is performed by holding away from the opponent. There is also option to turn sound off and on. 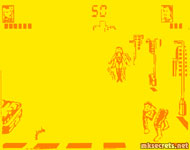 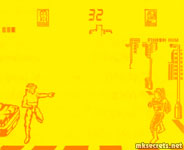 The other Tiger handheld, which received a Mortal Kombat 3 version was VRT-X. The HandHeld LCD version had 8 playable characters which are the same as the R-Zone version. Unfortunately there is only one arena in this game - Subway and weird Fireball - Fatalities. Each character has two special moves now, except Jax who has 3 (Fireballs, Flash Attack and Jump Attack). The game use two-level arenas like King Of Fighter games (just like R-Zone version). You must beat your opponent in 2 of the 3 bouts to advance to the next round. Of course the stupid point system is present again and the numbers are: 20 points for normal attack, 50 for special move, 350 for finishing attack and 500 if you beat the game. If you pick a character on the Right side, then you'll fight Sindel, Sheeva, Shang Tsung, and Kung Lao. If you pick a character on the Left side, then you'll fight Nightwolf, Sektor, Jax, and Stryker. You have only one kick and punch buttons. What is interesting is that because the display was very hard to see sometimes, Tiger introduced the Light Source for the VRT-X models. It is designed to use a hologram in the reflector and the unit also contains a retractable light source to illuminate this hologram. Of course the battery life dies way quicker if the Light Source is used, so most people almost never use that. Both ports were really not enjoyable and bad. 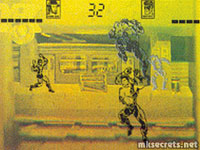 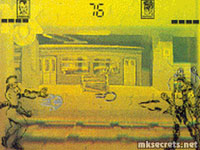 Mortal Kombat Trilogy appeared on Handheld LCD, R-Zone and Giga Fighters (!). All three ports were horrible. The Handheld LCD and R-Zone versions had 7 playable characters (Kitana, Sonya, Mileena, Sektor, Ermac, Cyrax and Sub-Zero), 2 bosses (Kintaro and Shao Kahn) and only 1 arena - The Wastelands. Just like the Mortal Kombat 1 version for HandHeld LCD, the only way to perform a finishing move vs your opponent is to perform the character's fireball. You must beat your opponent in 2 of the 3 bouts to advance to the next round. Shao Kahn can morph (wtf!), but he can only morph to a characters you've already beat earlier in the game. There was once a rumor that you could unlock play as Human Smoke and his face would appear where the timer is. This was just a rumor and was proven to be a fake. Both versions had the same points system 10 points for normal attack, 70 for special, 400 points for winning a bout, and 600 points if you beat the game. If you pick a character on the Right side (a male character) then you'll fight Kitana, Sonya, Mileena, Kintaro, and Shao Kahn, in that order. If you pick a character on the Left side (a female character), then you'll fight Sektor, Ermac, Cyrax, Sub-Zero, and Shao Kahn, in that order. You beat the game if you get 8550 Points. If not, then you start over. The R-Zone version of the game contains a button with Brightness control, which is useful sometimes (because of the way R-Zone displays games). This version of the game also supported the R-Zone Xtreme Pocket Game Control Pad, which was way more comfortable than the original. 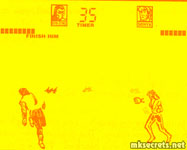 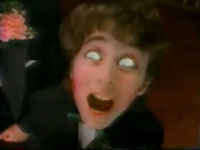 GigaFighters is like Giga Pets. If two people had them, they could connect the units and fight. They fit on your keychain and the graphics are just like regular Handhelds, only crappier. GigaFighters is slightly different because you could also link it to your PC to play a fighting game over the internet against other people. The Giga Fighters version was released an year before the HandHeld LCD version. There are 6 fighters in the game (Kitana, Rayden, Scorpion, Sonya, Sub-Zero, and Shao Kahn). The game even had some secrets in it. To select Shao Kahn you must enter your name as BOSS, if you type GORO you will watch Goro's yell, if you typed TAUNT you will see Shao Kahn's taunt, and to enable fatalities you have to type your name as FATALITY. In the game you can train up to 3 fighters at once. Each of them has special moves. It's important to set the clock on your Giga Fighters to the correct time, because Giga Fighters eat, train, and sleep on a natural schedule. If you don't set your time correctly, your fighter could get confused - it might sleep all day and keep you awake all night. After you start the game, the game will be in Clock Mode, where you must configure it right. The Giga Fighters supports also voice activation, after choosing this activity press Left button to turn the voice activation On and then Right button to turn it off. While the game is in "Game Mode" you will see your active fighter exercising, stretching and practicing combat moves. The game's screen is your fighter's home. When your fighter needs something, the ALERT icon will light up in the upper left corner. You should respond to your fighter's needs at this time with the correct activity. If they are hungry, feed them. If they are bored, they may need to train. If they are dirty, let them take a shower. Eh... I don't know, Tamagochi with MK fighter will never grab me.

Mortal Kombat Mythologies: Sub-Zero was released as Handheld LCD game in 1998. There were only 5 stages in the game and all played on the same background - The Wind Realm. All opponents are monks, and the last boss is Quan Chi (the others are Wind God, Water God, Fire God and Earth God). Even though the mini picture of Quan Chi says "Shinnok" in the game, it's still Quan Chi. I got this from PortableMK : it seems that Sub-Zero does in fact have a fireball move. The only problem is, no one knowd how to perform it. It is a limited special move though, which is what the second power bar is for.

In the first stage of the game your opponents are white monks which need 3 hits to be killed (you got 30 points per each), and you need 20 hits to beat the Earth God (you get 400 points for that). In the second stage the monks are black and you got 400 points if you beat the Wind God. Level 3 has monks with swords and God of Water (25 hits for 500 points). Level 4 has black monks with swords (original I know) and you need 25 hits to kill the Fire God - you will receive 600 points. The final stage has the same opponents and Quan Chi as the final boss as already mentioned. You will need 30 hits to kill him, and you will get 340 points for that. I don't know what actually happens when you beat the game because I never played it, but i will definitely would give it a try if i ever had a chance to LOL.