Platform Information
The game.com (pronounced in TV commercials as "game com", not "game dot com" and not capitalized in marketing material) was a handheld game console released by Tiger Electronics in September 1997. It featured many new ideas for handheld consoles and was aimed at an older target audience, sporting PDA-style features and functions such as a touch screen and stylus. However, Tiger hoped it would also challenge Nintendo's Game Boy and gain a following among younger gamers too. Unlike other handheld game consoles, the first game.com consoles included two slots for game cartridges and could be connected to a 14.4 kbit/s modem. Later models reverted to a single cartridge slot. 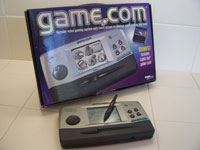 Status: Unknown
Additional Notes: The game hasn't been tested yet. Screenshots are not from the emulator.