Platform Information
The Nintendo DS (sometimes abbreviated to DS or NDS) is a handheld game console developed and manufactured by Nintendo. It was released in 2004 in Canada, U.S., and Japan. The console features a clamshell design, similar to the Game Boy Advance SP, with two LCD screens inside - with the bottom one being a touchscreen. The Nintendo DS also features a built-in microphone and supports wireless IEEE 802.11 (Wi-Fi) standards, allowing players to interact with each other within short range (10–30 m, depending on conditions) or online with the Nintendo Wi-Fi Connection service, which launched later in the console's lifespan. This was the first Nintendo console to be released in North America prior to Japan.

The system's code name was Nitro, and this can be seen in the model codes that appear on the unit (NTR-001). The console's name officially refers to "Developers' System", in reference to the new game design the system was meant to inspire, and "Dual Screen", the system's most obvious and distinct feature.

In 2008, Nintendo was honored at the 59th Annual Technology & Engineering Emmy Awards for pioneering the development of handheld games with its Nintendo DS system. 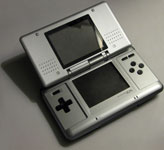