Platform Information
The Nintendo 64 (ニンテンドウ六四, Nintendō Rokuyon?), often abbreviated as N64, is Nintendo's third home video game console for the international market. Named for its 64-bit processor, it was released on June 23, 1996 in Japan, September 29, 1996 in North America, March 1, 1997 in Europe and Australia, and September 1, 1997 in France. It is notable for being Nintendo's last home console to use cartridges to store games (with Nintendo switching to a proprietary optical format for the GameCube), and for being the first modern home console to come with a controller featuring an analog stick. 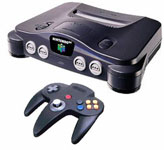