<!--Tags: mkd, mku, mka, misc--> A connection between the Mortal Kombat franchise and the Pokémon franchise is not exactly something that anyone would think about for obvious reasons, however this connection can now be seen thanks to what could be a direct reference to the MK series in the latest Pokémon main series games, Pokémon Scarlet and Violet, found by yours truly.

In Pokemon Scarlet and Violet, once you're about to face the Ice-Type Gym Leader Grusha (he's a male character, by the way, don't let his name and appearance fool you), you will need to go to the staffer of Grusha's Gym to get the approval to face him, at which point he will refer to Grusha as the "Sub-zero Shredder". This is a reference to the MK blue male Ninja and the Grandmaster of the Lin Kuei, Sub-Zero, but on top of that, it's also a reference to Sub-Zero's default costume in Mortal Kombat: Deception, which heavily resembles Shredder from the Teenage Mutant Ninja Turtles franchise, and would return as an alternative costume for Sub-Zero in both Mortal Kombat: Armageddon and Mortal Kombat 11 Ultimate. 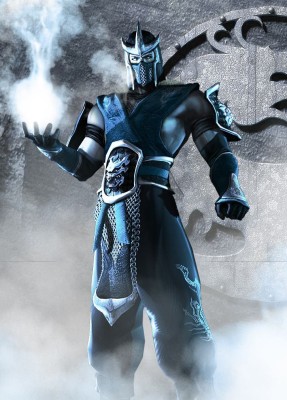 Here's a video from my YouTube channel, showcasing the reference:
Of course, this reference could be only a coincidental one and with no actual intention by Game Freak, Nintendo and the Pokémon Company to reference MK, but even if so, it is still a funny coincidence that a game that is mainly directed for children will make a reference to an adult-oriented series, as two complete opposites of the spectrum meet each other. And it's even more special for yours truly, since both Mortal Kombat and Pokémon are my top 2 favorite video game franchises of all time, being at No1. and No 2. respectively, and they are also 2 of my top 5 all time favorite pop culture franchises, alongside Teenage Mutant Ninja Turtles, and as a big fan of all 3 of them, I love it.